Join our subscribers list to get the latest news, updates and special offers directly in your inbox

When Can Yorkies Leave Their Mothers?

When Can Yorkies Leave Their Mothers? Humans have an age limit when they are officially considered to be adults but it is never the number which tells whether someone is already an adult or not. However, with dogs things are a lot easier. Their maturing depends just on their puberty and when it happens, usually […] The post When Can Yorkies Leave Their Mothers? appeared first on Yorkiepage.com. 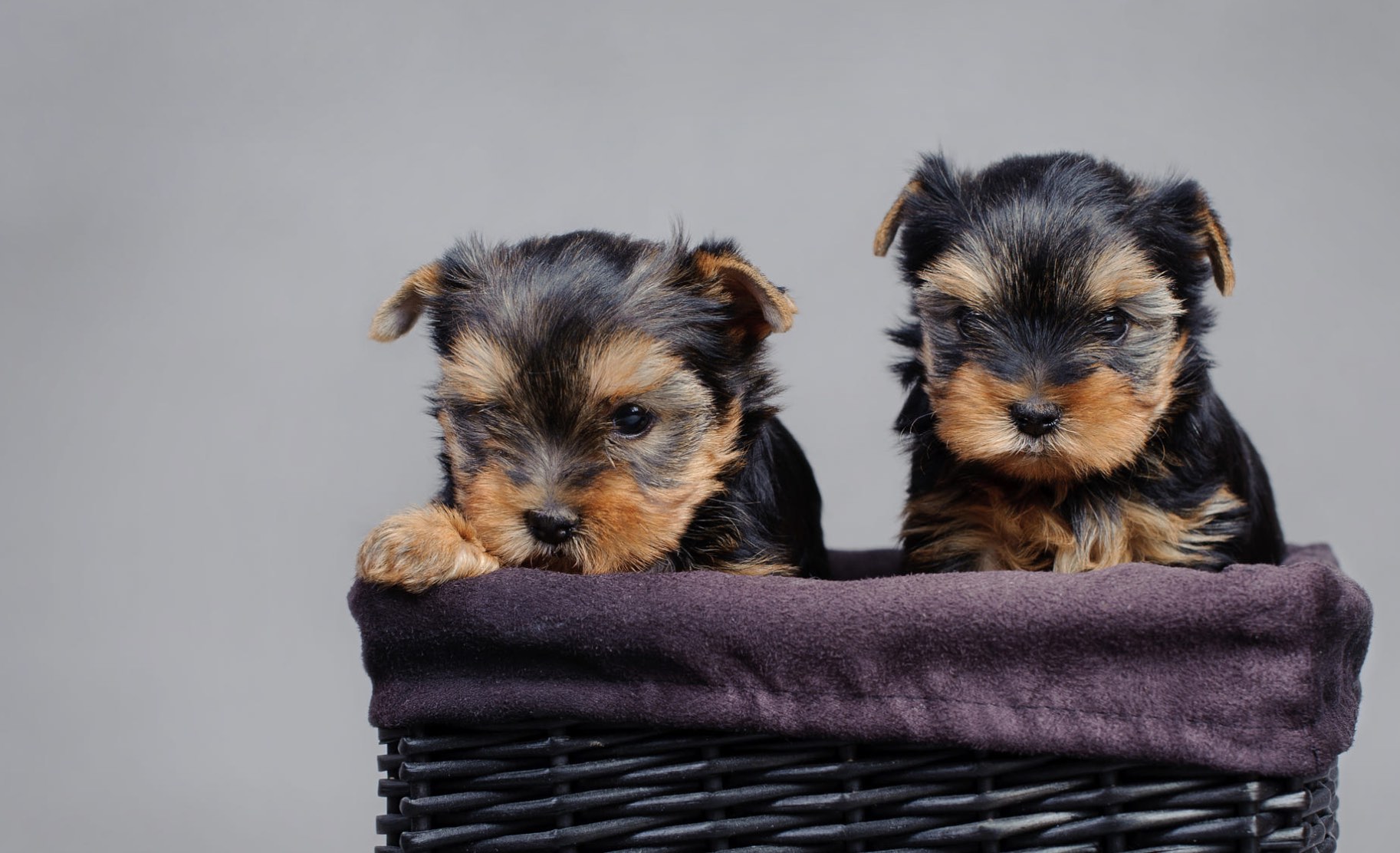 When Can Yorkies Leave Their Mothers?

Humans have an age limit when they are officially considered to be adults but it is never the number which tells whether someone is already an adult or not. However, with dogs things are a lot easier. Their maturing depends just on their puberty and when it happens, usually the behavior changes too. That’s how even the dog’s food is separated into pup’s and adult’s. And it is nothing about psychological maturity. However, the question of today is when can yorkies leave their mothers or when a yorkie is mature enough to leave his mother?

A Yorkie pup should stay with his mother at least until the age of 8 weeks. Weaning should be started at the age of 4-5 weeks and end around the 6th week. Then the pup should start eating solid food. 1 year old Yorkies start to be adults and can be given adult dog food.

As you can guess, we are not going to talk about mother and child psychology. But I will give you some information about how a Yorkie pup grows up, about the importance of letting him stay with his mother for an appropriate amount of time and how to take care of him while he’s so little.

Those are ones of the best times of having a dog when he is a “kid”. In other words, a puppy. He is not just lovely, but energetic and playful, too. However, there are some things that are good to know about the growth

Yorkies from birth to 7 weeks old are newborns. They can grow then very rapidly and start gaining weight right away, they double it in the 10 first days of their life.

From 3 to 4 first weeks the dam will be the main and only care taker of the newborns. She will feed and clean them. There might be cases when the dam is underweight and weak so she can’t nurse all of the newborns so then you would need to feed the ones who are left behind from a bottle.

At the age of 3 weeks, the pups become more active, they walk around, the eyes are already opened and you should let them explore the surroundings. They will have their sense of smell developed by then and know the directions but will be far too young to go outside. They will start playing with brothers and sisters, will be discovering vocal cores so might try to bark and might be interested in toys, since at this time milk teeth start appearing.

4 to 5 weeks old pups gradually will start the process of weaning and eating solid food. From the age of 5 weeks the puppy can begin house training. He will be full of energy and wish to play, he socializes and is becoming a part of the whole family.

6 weeks old Yorkie has fully developed sight and hearing and you can start calling him by his name; probably he won’t respond yet, though, but it is a good age to start him getting used to it. His wish to explore will be beyond limits and if one day you miss a pup in his bed, you might just be going to wonder around the whole house – the pups will start showing their independence. The dam will produce less milk so she can spend more time playing with pups than feeding.

Eventually, from 8 weeks to 1 year Yorkie will be a puppy. The first half a year he will be a young puppy and the second half – an adolescent. The habits of the dog is being formed then so it is the perfect age to train them, teach commands and the rules of the house. This age is perfect to get a home of his own and find a new family.

How to take care of a baby Yorkie?

That’s the most difficult part. We all know the feeling when we read a bunch of books about theories of life or how does it work and then we try to apply them and it turns out that nothing works as expected. That is why I prefer some practical advice. That is why I will shortly present some tips on how to take care of a baby Yorkie or what you might need to pay attention to.

First of all, nutrition of the dam is as much important as of the puppies. If the dam is weak, she can’t take care of the pups. She needs high quality food, snacks and water. If she doesn’t drink enough water, the milk can decrease. Some pups might have trouble in eating, being pushed away by other pups, so you should remove other pups aside for a while and let the poor one eat. One more detail which is very important about feeding, the puppies can scratch the skin of the mother’s belly and make her unable to feed or be feeding in pain. So you should cut the tips of the nails off but not too much because when dogs are so little, it is easy to touch the vein of the nail and cause bleeding.

Like with babies, it is important to watch the weight of the puppies. If they are underweight, they might be not getting enough milk. And this can cause hypoglycemia (a fast drop of sugar level in the blood). Then the puppies will feel weak, confused, have weight loss and need to be taken to a vet. To avoid that, just make sure that the underweight pup has a good access to the mother feeding.

Next, when the puppies are around 3 weeks old, they need worming medication which can be bought at the pet stores or given by a vet according to the weight of the pup. Without the medication, the little one might have such issues as weight loss or diarrhea.

There is a very serious part about love and affection. It is necessary not just because everyone needs it and can’t live without it, but because the puppy should become used to human touch, human noises and all the procedures of taking care, such as washing, mouth care, grooming. You can call it socialization which should help in the future to adjust to a new home and feel less anxious about casual procedures.

Take care of the place where the puppy lives. It can be a box or bin which is easy to be cleaned. Cover the bottom of the box with some soft materials like old T-shirt or towels, just be sure that they don’t have any holes for the puppies not to be tangled in. In order to teach them how to urinate in proper places, make them aware where is the territory where they sleep and where they urinate. The sleeping area should be always clean and the newspapers in the “bathroom”territory should be changed once in a while that that pup could distinguish the smell.

Eventually, when the pup is 6 to 7 weeks old, he needs his first round of medication. That includes a combination of shot vaccine for Distemper, Hepatitis, Parvovirus, Parainfluenza and Coronavirus. And then your pup is almost ready to set off to his new home.

What does happen if you take Yorkie from his mother too early?

Taking a puppy too early from his mother might make him later be afraid of other dogs. Also, it can cause the loss of appetite and weight, increase distress, higher mortality and higher susceptibility to diseases. Moreover, bite inhibition will not be learned from the siblings and the mother, good manners, too. They might become too clingy and have a more severe separation anxiety. Some of the sources say that the pups should be left with their mother and siblings to socialize even until the age of 9 or 11 weeks in order to be well balanced and non-aggressive dogs.

This is a short summary of all the problems that might appear if the puppies are separated too early but the summary seems to be enough to understand the importance of the family. Even if we are talking about dogs.

I guess it would be hard to foster a bunch of dogs until they turn old just to make sure that they socialize enough. I believe that there are many loving families which would take in the puppies one by one. But even if they can survive without their mothers for the rest of their life, they can’t when they are just little babies. I think that it’s rather a joy than a burden to have a bunch of puppies for a while. It should make everyone around smile and laugh.

The post When Can Yorkies Leave Their Mothers? appeared first on Yorkiepage.com.

CBD Oil For Yorkies: Benefits, Side Effects and Dosage

The Complete Puppy Care Guide: From Birth To Adolescence

Bringing a new puppy home can be the most exciting thing for a pet parent, but the...

We are excited to announce that our delivery service is expanding and we are offering...

Why Do Dogs Kick Their Leg When You Scratch Their Belly?

Have you ever wondered why your dog kicks his leg when you scratch that sweet spot...

Set your timers for Cupcake Day and get ready to bake a...

In reply to Kari. Hi Kari, we just sent you a text!

This site uses cookies. By continuing to browse the site you are agreeing to our use of cookies.